When I was first asked to write a letter to a child in Cameroon, I was quite excited. The feeling of talking to someone I do not know in another country, let alone another continent, was shocking. This project started in 2012 with the help of ACTWID. The aim is a “cultural exchange” between students at FGZ and a group of students there that are aged 10-16 years. ACTWID supports the community by providing information on health and environmental issues, as well as assistance to children who have suffered loss in the family. I remember after the pen-pal project was mentioned, our teacher recalled one of the boys from Cameroon that responded. His name was Henry, he wrote very cheery letters, but one day his teacher wrote instead of Henry. This was because he had died due to an illness.

We not only did we write letters, a lady called Lydia, who comes from Cameroon and is training to be a nurse in Switzerland, gave us a talk about the situation in the English speaking part of Cameroon, and the best part was the bake sale we held on 15th December. This was organised by 2 classes, P1c and G1c. Every student was asked to bring homemade bakes. This could be anything from cookies to cakes. Since we had class on the day of the bake sale, students were given shifts. This was a lot of fun since everyone was allowed to spend equal time running the stand. A bake sale has been held almost every year (except during Covid!) for about 10 years. The record was CHF 800.-, however, this year we broke it with an amazing amount of CHF 1020.-. This surprised everyone, we are all so excited to be able to send such a giant sum over to Cameroon. The bake sale was something we could do together as a class.

The schools are still closed in the region of Bamenda in Cameroon due to covid and political unrest. The money will be used to help the ACTWID centre provide lunches, mentorship and school materials for local children. 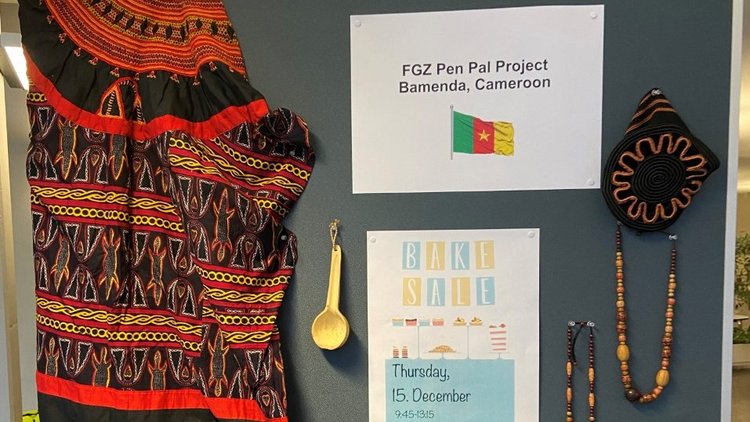